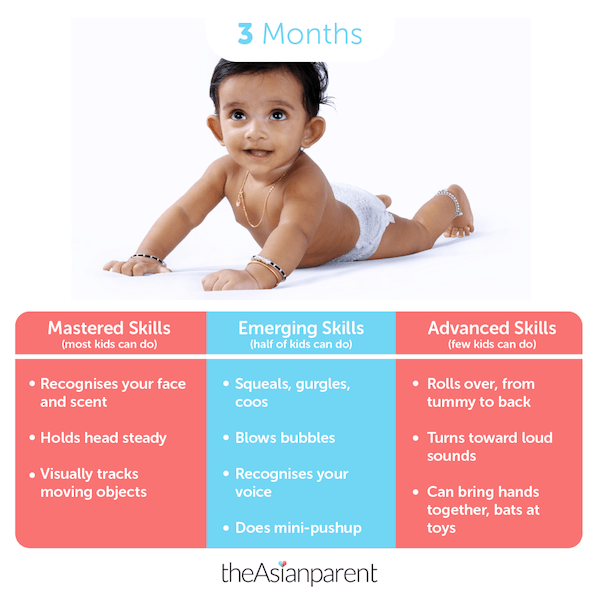 Baby Development and Milestones: Your 3-Month-Old

What is your baby's progress this week?

Now that your infant is more versed in moving his hands, he will begin exploring the world around him with his hands and fingers. He will be touching, feeling, and grabbing a lot of things. He will even become more aware of different people around him and will use his sense of smell as a way of telling the difference between the people he knows and strangers.

Physically, he’s looking more like a chubby cherub, now. His head and body seem more proportionate and you’ll start to see cute rolls appear on his adorable thighs and arms.

Three months may not be a long time, but your little infant is growing much faster than you imagine.  For instance, your 3 month old baby can now not only move his arms and coordinate how to move his hands by sight, but also have enough muscle strength to support his head.

In particular, your little one should be:

You’ll also be glad to know that it’s not just movement that your infant is capable of. His developing senses enable him to begin understanding the world a bit better, especially his sense of:

Your infant’s eyes will be able to focus better now – all the better to see you, mummy! | Image Source: Stock Photo

Three months after birth, your little bub is just beginning to understand the world around him. His developing brain is working hard to make sense of reality.

At 3 months old, your baby is also now much better at tracking objects that move. Your infant’s eyes should be working together to move and focus, especially when something is moving in front of him, such as a toy or your hand.

Even though your little bub hasn’t attended pre-school or met his peers, he is smart enough to understand how to interact with others from your social cues, mum and dad!

You’ll notice that he will be more open to smiling at other people. Your baby’s sweet smile is no longer exclusively reserved for just mummy and daddy now! He will begin to be more generous with his grins towards anyone who flashes him a smile first.

Your 3 month old baby’s personality is really starting to show, as he gets more curious and friendly about others. Your bub will begin to become fascinated by the other babies around him, or even his own reflection in the mirror.

He is also trying to understand emotions and communication. He will begin to link what you are saying to your facial expressions.

Rejoice, mums! Your little bub is learning how to interact with other people in ways other than crying.

At this stage, crying will no longer be your baby’s main method of communication. Within the coming days, he will start to express himself in other ways, like cooing, gurgling, squealing and making vowel sounds, such as: Oh, Ooh, Ah.

Your 3 month old baby is getting better at expressing emotions

Contrary to popular belief, babies at this age should not start solid food yet. Studies have shown that introducing solid food too early is actually harmful for your little one at this age.

As he does not have a mature digestive system yet, it is very likely that will not be able to process or digest the food. Introducing solids too early can also lead to obesity, trigger possible allergic reactions, cause digestive problems, or even be a choking hazard which can potentially be fatal.

Babies are generally ready to have solids when they are around six months old. Right now, your breastmilk offers  your 3 month old baby all the nutrition he needs.

Also, do remember that growing babies don’t just need food to nourish their bodies: they also need enough sleep. Some babies might be sleeping for longer at night by this age. But then again, every baby develops differently. So it’s okay if your  little one might not have reached this particular sleep milestone just yet.

At 3 months old, your baby should get the following vaccinations:

Take note that since your child is still very young, he can still be exposed to common childhood illnesses like:

Note: Never give your baby medicine that is not prescribed by a paediatrician.

While different babies develop at a different pace, there are certain milestones your 3 month old should reach at this stage. If you are worried about your infant’s development, be sure to consult your child’s doctor as soon as possible.