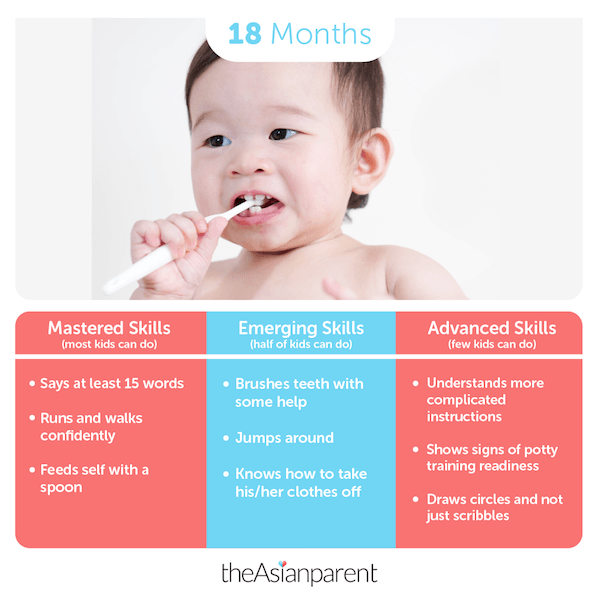 Baby Development and Milestones: Your 18-Month-Old

Isn't he an adorable little mummy's helper? It's all hugs and kisses and big smiles at this stage of toddler development! Enjoy it to the max, because tantrums and "no" are waiting just around the corner...

18 month old development and milestones: Your little one loves to play!

By now, your little one is walking, and possibly running, and you can see that he is surer on his feet now. He walks upstairs if you hold his hand and is able to crawl down backwards. He might even be starting to jump!

He will probably have developed a preferential hand, so you finally know if he is right-handed or left-handed. It really doesn’t matter which one he is, but if it is not clear yet, don’t worry. As part of your toddler’s 18 month old development and milestones, he will be grabbing everything in sight. Sooner or later you will know which hand he prefers!

He has also discovered how to stack blocks and might be able to build a tower of two to four blocks high. He will really enjoy knocking them down to build them again!

Other fine motor skills are showing themselves too: Your little one likes to scribble on paper, especially if he often sees you write notes or lists. His scribbling is mostly marks and patterns, do not expect any sort of drawing to emerge!

All this activity means that your tiny toddler has a hard time slowing down. Nap times can be a struggle. A lot of children switch to one nap around this time, and some even drop their nap, though that is a little earlier than usual.

Disrupted sleep and changing sleeping patterns may also mean early wakings. Pay a little extra attention to your little one’s sleeping habits, and if you need to, adjust the schedule. The schedule he gets on now will probably last him through the rest of his toddlerhood.

If you want to help him develop agility in his fingers, you could string large wooden beads together. He’ll need a bit of help from you but will love to wear the result. It’s a good way to again show him different shapes and colours as well.

If he shows interest in going to the bathroom, you could consider potty training. However, there is no rush. Most children do not gain full bladder control until after their second birthday.

Continue to take him outdoors if the weather is fine. This not only helps to burn off all that extra energy but also gives him more space to practice physical motions.

At 18 months there is so much fun to be had with your little one!

Your bub loves to sing, and he loves it when you sing for him. He adores clapping along and making the movements. Rhythm sticks or little drums are also great favourites at this age, although a sense of rhythm is still lacking.

Listening to stories and pointing at pictures is another lovely, educational activity. Your tiny tot might be able to put together large puzzle pieces into all the correct places, especially if you two have been practising together a few times.

Watch him copy your actions during pretend play, like making a call, working on a computer, reading a book or doing random chores. He loves to make animal sounds to his cuddly toys and is usually able to match the sound to the animal.

At times, you might find a stray sock on the floor, or – we pray it never happens to you – a stray diaper! Your toddler is learning how to take off his clothes, so do check on him when all is too quiet!

Continue doing simple puzzles with him. Of course, you might need to help in the beginning, but do let him figure it out on his own as well.

Crank up a favourite tune and boogie to it! It’s fun and really great for rhythm and coordination.

Try making a paper hat for him. Show him how to put it on his head. You’d be surprised that even something as simple as that can keep him fascinated for hours!

They don’t call them mama’s little helper for nothing! Your tiny tot loves to help you with tidying, or other chores during his 18 month old development and milestones. It makes him feel proud and accomplished when you praise him for his efforts.

But remember, his attention span is still very short! So if he’s had enough, let him quit and get on with another game. Praise him for his efforts, and correct without anger when he gets it wrong.

Model the behaviour you want your bub to show. He learns by example. This can be anything, from doing chores to social norms like sharing!

Your little toddler can say about ten words right now, and one of them is definitely “mine!” He is marking his territory, which is part of normal toddler development. In the same way, he expects you to set the boundaries for him as well.

Get ready to deal with tantrums! He might refuse to get into the stroller, be finicky about food or interrupt you endlessly when you’re out with friends or occupied. It is still mostly about him.

Try to be firm with him; clear rules make for a predictable environment and this, in turn, makes him feel safe.

Make sure you tell your little one you love him. He does not automatically know this and will thrive on your cuddles and kisses.

There are plenty of ways to involve an 18 month old in the daily chores. He could help you to prep the french beans, or put the carrots you cut into a bowl. He could put laundry into the machine, or help you sweep up stray crumbs after snack time. He loves to watch you, so take the time to show him what you’re doing.

Show him how to share during play dates and teach by showing him how to take turns playing with a toy. Do not be discouraged if he continues to be selfish, just be consistent, and he will get the hang of it soon.

If he starts to play more independently, let him be. There is no need to feel guilty when he is playing on his own.

Listen closely! As part of your toddler’s 18 month old development and milestones, your bub can probably say an average of 10 words at this point even if he is able to understand more words than he can say. These include his words for mummy, daddy and the names of other caregivers.

He can point to common objects if you name them and identify body parts. He can also recognise people in pictures and on screen.

Some toddlers may begin forming two-word sentences, but most are still soaking up vocabulary by listening attentively.

An ongoing commentary of what you’re doing at the moment really helps him to learn new words and their usage.

Read and sing nursery rhymes. Songs with actions or requires him to point to parts of his body is an added plus.

Describing what you see when you take a walk together, or reading to him are good ways of expanding his vocabulary.

You will notice his growing memory when he begins to protest if you skip pages! Yes, he does recall the story, and he wants you to read it properly.

As part of 18 month old development and milestones, toddlers typically weigh between 9 and 12 kilograms and are about 76 to 84 centimetres tall. Of course, all toddlers develop at their own pace, so your little bub might not be within these stats. That’s okay!

As your child is exploring his boundaries, you could be facing struggles around food and dinner time. A good rule of thumb is: You decide what and when food is served, but the child decides how much to eat.

As long as you provide him with a variety of wholesome, nutritious foods at meals and snacks, he should be fine. If he eats little one day, he will usually make up for it the next!

To meet his daily needs, give him about three servings of half a cup of cooked rice or cereal, a small apple cut into small pieces, 1 cup cooked mashed or finely chopped vegetables, and 2 servings of fish or meat 1/3 the size of your palm. He will also need two cups of dairy. You can choose to switch it up with milk, cheese or yoghurt.

It’s time for another set of immunisations. It’s time for three boosters: DTaP (diphteria, tetanus and pertussis or whooping cough), the five-in-one, which includes poliomyelitus, and the Hib for haemophilus influenza type b.

Do read up about hand, foot and mouth disease. Find out what it is, and what you should do if your toddler has it.