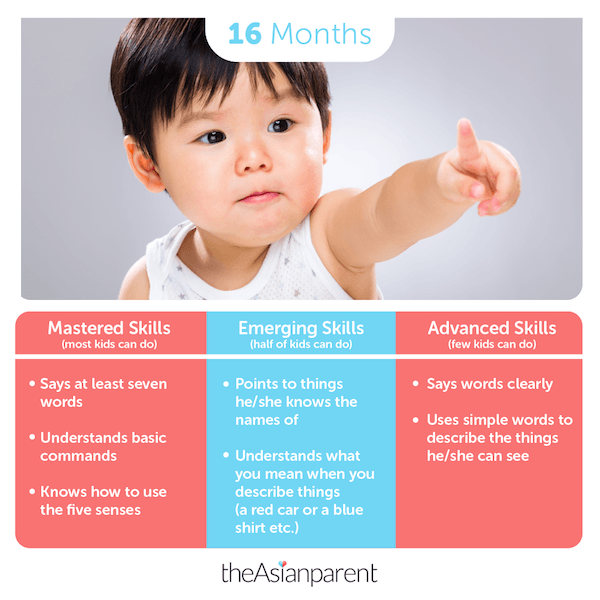 Toddler Development and Milestones: Your 16-Month-Old

Your little one is entering a whole new world: the one he makes up himself! It's the birth of his imagination. Creativity, problem solving, fun and games are ahead in this stage of toddler development. Find out what other exciting things your tot can do now!

This is also the time to develop eyes in the back of your head and to always have your ears out on stalks. Where is your little one? What is he up to? Did you just hear the box of blocks hit the floor? Again?

Your 16 month old angel is working hard on his toddler development by practising climbing, running, reaching, grabbing and throwing. It can be exasperating, especially as his tidying away skills still leave a lot to be desired.

If he is a confident walker, this is the time when he will begin to take his waddling skills to the next level. He might be attempting to walk with toys or stuffed animals in his hands and bring those to you. Or he could be trying to walk backwards!

As part of your toddler's 16 months old milestones, he might be able to feed himself and hold his own cup, although, do expect some spillage. For now, you will have to put up with some mess. But don't worry, practice makes perfect.

He loves nothing better than to take a walk outside with you, inspecting plants, flowers and watching cars, buses and trains pass by. Other favourite outings include the beach to play with sand toys and dip in the ocean, the pond to watch turtles and fishes, the park to throw a ball or even just the playground downstairs.

Take him to the playground even though he might be too small still for a lot of the climbing equipment. He'll be thrilled to see all the "big" two- and three-year-olds climbing and sliding. And it's by watching them that he'll learn how to do it himself!

To encourage his fine motor skills, try imaginary food play. Set up a doll, a spoon and some edible baby puffs. He can either use his hand or a spoon to feed himself or pretend to feed the doll. With this activity, he will get to practice his pincer grip, hand-to-mouth coordination and his concentration when it comes to feeding his doll.

Between 16 and 18 months old, it is time for the next stage in cognitive toddler development: You will see a shift from copying actions to symbolic play. This means that your little one goes from grabbing your phone to make a pretend call to using blocks or spoons as a phone to pretend to make a call.

It is adorable – and it is a major development. Your little one can imagine things that are not really there and pretend play. Another plus point this month is his ability to use all his five senses. He might still get confused and say he can smell the chicken in his food, but with practice, he will slowly make the right associations.

But although cognitively he is progressing really well, his attention span is still very short! He can only focus for a few minutes at a time and is easily distracted during this 16 month old milestones period. One moment he is stacking toys, the next moment, he is wandering off in search of something else especially now that he understands object permanence.

You might be able to get him to focus by giving simple instructions, but chances are, he will quickly lose interest and move on to the next thing.

Play games that require you to give simple instructions. Games like "Simon Says" or even "Freeze!" are great and really fun!

Try setting up a mini treasure hunt at home and have your little toddler seek these treasures out. Try hiding daily objects so that both of you can practice saying the name of the object when it is found.

If he already mastered pointing at different parts of your face when you name them, switch up playing "Mirror Me” with the remaining parts of the body.

You can also get your toddler toys or things that he can play pretend or play dress up with.

So don't worry if your angel doesn't readily give up his toys to somebody else – even if he wasn't playing with those in the first place. Remember, just a few months ago he had a hard time understanding that you and he were separate people. (In fact, sometimes it seems as if he still doesn't quite believe it.)

There's light on the horizon because by interacting more, he can begin to learn about other people's emotions and also empathy. You play an important role when teaching him about emotions by saying things like: "You are crying, you are sad," and "You are laughing, you are happy." By understanding his own feelings, then he can start to see that other people also feel the same.

If your little one is developing a strong attachment to one parent, don't give in to his preference. Make sure that he spends time alone with both of you. Of course, your bub may protest or even cry when the preferred parent leaves, but he'll be alright after a while. Remember the short attention span we mentioned earlier?

Trying singing a song or playing a game when your tot is sad or upset because he is easily distracted at this age. You can acknowledge his feelings and quickly move on. This even works if you do it in the early stages of a tantrum.

To help your toddler achieve his 16 months old milestones, you can keep showing him how to take turns when playing. It is not something that happens overnight. But as he slowly begins to understand empathy, you might be surprised to see that your little tot is quite generous and caring after all.

Your toddler might still depend on you especially in unfamiliar situations, but try to let him play on his own so that he can learn to be independent.

Yes, your toddler is learning how to hold a conversation! He might not be making much sense yet, but he is trying to tell you things and listen to your response. Notice how he imitates your own style of communication?

Unfortunately, that also means he is imitating saying "No". Sometimes you even catch him doing the very thing he just said "No" to! This is because your tiny tot is experimenting with words and their meanings.

As part of his 16 month old milestones, your toddler should be able to say at least a few separate, distinct words. Some words may not be so clear but he's getting there.

Don't be surprised if he suddenly starts singing the words or at least the tunes of all those nursery songs you've been singing together. A more advanced achievement would be slowly stringing words into short sentences especially if you have been diligently reading to him every night. And you better get your ears ready for it because his language skills will explode before you even know it.

Expand on what your toddler says. Like for instance if he says "Doggie," you say "Yes, that is a dog."

Monitor your own use of "no" so that your toddler will start to use it correctly. Use it only when it's needed for safety.

Continue to do lots of reading and nursery songs with actions to expose him to new words, especially their usage and meanings.

Not all children are hungry upon waking up, especially if they had a large meal the evening before. Breakfast could be up to two hours after waking up.

Eating habits can be erratic at this age. One day, he might devour three bowls of porridge, the next day he only takes a few spoonfuls. One day he adores fish, the next he won't touch it.

As part of your toddler's 16 months old milestones, he should weigh about 9.6-12.2 kg and be about 79.5-85.0 cm tall. He might be protesting the high chair and generally having too much fun to slow down enough for a full meal.

Don't worry too much. As long as your bub is active, happy and growing well, he is doing fine even if it seems he is not eating all that much. It is important to have regular meal times and snack times. Toddlers have small stomachs so they won't eat a lot at each sitting, but they do need regular topping up. Try to stock up on healthy, filling snacks, such as crackers and fruit, and limit the sweets, as these don't help them grow.

Continue to give him a variety of whole grains, protein as well as fruits and vegetables. 3 servings of half a cup of cooked rice, 1 cup sliced or cubed fruit, 1 cup cooked mashed or finely chopped vegetables, 2 servings of poultry the 1/3 the size of your palm should fuel your little one. Don't forget his 2 servings of milk too.

Immunisation due this month is DTaP if he hasn't already gotten it, and watch out for mild diarrhoea especially if he is still putting random things into his mouth.